A Tale of Two Watch Bands 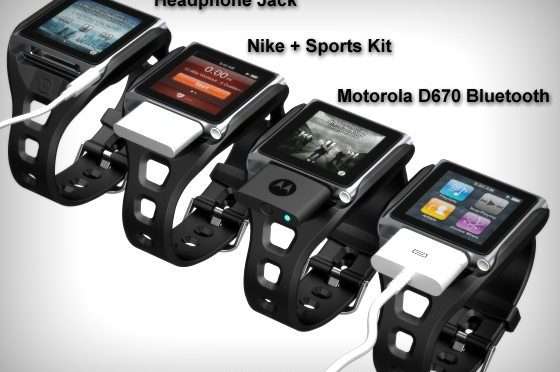 Let me start out with what should be an obvious disclosure. It is ridiculously easy to play Monday morning quarterback, even easier still when one has no skin in the game. With that being said I’ve been able to observe for the last several weeks the remarkable success and the puzzling conundrum of two remarkable products come to fruition on the crowd funding website kickstarter.com.

On one side there is the brain child of Scott Wilson and his Minimal Team: the TikTok+LunaTik sensation that has broken records and garnered nearly a million dollars in support. On the other hand there is Tim McLellan’s well thought out Ultimate One., which just passed over their minimum funding requirement in the last 24 hours. Both of these geek chic fashion accessories help turn the 6th generation iPod Nano into a usable wrist watch, both used kickstarter.com to assist in funding their first round of production, and both did/will succeed in that. These two projects, although similar, went about appealing to the masses with some similarities, but they differed on little approaches poised before their potential backer. By studying both of them one can gather some interesting ways of potentially appealing to this kind of market in the future; not necessarily as a “do & don’t” list, but rather “this works, but this works better”.

Both of these projects did have compelling videos to pitch their products, which is very important as trending through the site those with videos got substantially more backing than those who do not. They also communicated with people interested in their projects who posted on their comment boards and updates. Nothing makes a potential buyer swell up a little with pride than a direct response back from the creator/owner of the project. Dialogue is very key to the success of kickstarter.com as a funding platform in general.

There are two major points of differences that separated the two. First off is the LunaTik. This is the 800lb gorilla that just can’t be ignored. It does not matter that their maybe potential shortcomings in the sense of water proofing or what is considered a true luxury band, this kit has the cool factor geek boys and girls love the world over. It is premium, it looks classy, it also is a part or all of 10,575 of the 13,121 backer pledges of the TikTok+LunaTik project… roughly 80.5%. The Ultimate One. is a direct competitor to the TikTok, but the LunaTik being on it’s own is the biggest differentiating factor here. The other is the viral sensation that this has caused, rippling through out the internet, culminating with a spot on Good Morning America just hours before the project closed. The second part is unpredictable. One can always hope for a viral sensation, but there is no way to plan for it. It is always a happy accident.

More minor instances I believe came into play as you scroll through the comments and also to understand the psyche of potential pledges. The first of the minor issues that came into play is “first to market”. The TikTok+LunaTik released their project on kickstarter.com first and as such had that “credibility factor” of being an innovator. Yet clearly the Quad Mountain Ultimate One. was in the pipe lines just as long. Both Scott & Tim said they were inspired the moment it was unveiled and immediately went to work on their prototypes. Unfortunately a small percentage of the community that found both projects labeled the Ultimate One. as a copy cat product. Those were just the few that vocalized it, not all that eloquently either. It is safe to assume many others thought the same and never posted their thoughts. Tim’s project suffered because of it, should his had come out first he might have been funded in the first few days of his project, not the last 2.

Small instance number two: minimum pledge. Scott & Tim both reached out to the community to back their product at a level just for the warm fuzzy feeling of hopefully helping an astonishing product come to life. Scott chose to make this minimal inclusion simply $1 with a lengthy appeal, while Tim went with a $5 minimum and “A huge thank you”. Although assisted with the viral campaign TikTok+LunaTik managed to have 128 minimal backers, people who just wanted to be a part of the “process” while the Ultimate One. had a total of 0. People could have still backed the Ultimate One. for just a $1.00, however that was not as obvious and it might have excluded someone who just wanted to donate a $1.00 just to be with the in crowd.

Attaching his name to another project that had a cult following helped show some of Mr. Wilson’s character, which endeared him more to the rapidly growing following that his bands had been cultivating. Neil Gaiman is a very famous author, and although The Price is not his most famous of works, it also has a little bit of a cult following. Scott used his new found celebrity to encouraged those backing him to consider backing another project that looked incredibly promising, but was coming up far short of funds with time running out. Needless to say with less than 7 hours to go the funding was met for The Price, at the time of it’s closing the third hugest funded project of all time on kickstarter.com and the first to close with an initial pledge request of $150,000. Scott has also backed the production of the Ultimate One.. Mr. McClellan has backed several smaller projects as well, although they have had less fanfare than The Price.

Prestige hits the number four spot on the little things. People like to feel exclusive even when it isn’t overly exclusive. Scott capitalized on this feeling by offering a limited edition serialized watch band. This band should after this backing never again be released in this color, which again adds to the cool factor. He did not limit this number, but put a premium price on it, which a total of almost 1,500 people paid for either by itself or by one of the 100 special party packs. The 100 special party packs were also a smart marketing choice because once they were gone, they were gone, but they sparked some interest, even from some well known tech celebrities like Steve Wozniak. These 100 did not last long, days at most, not even a full week. It would have taken simply 30 of these party packs to made the project eligible for funding, a 100 in the first days stuck at people’s sense of a bargain, which leads to the final point.

Rounding out the little things is the perception of monetary value. There is little doubt both developers wanted their products to hit mass production and be big sellers. However Scott broke it down and then discounted it even more to appeal compared to Tim’s idea. Scott disclosed the future MSRP for his products, given the pledge the idea that not only will they get this product first, but less than they would have if they were to purchase it in a retail store later, and the exact amount. Further more Scott discounted a “bundle” of his two bands $5 should one want them together saving a consumer potentially more money. And of course for those lucky 100 the valuation of a party pack when broken down equates to $675, which at $500 seems like quite a savings.

The Ultimate One. has not yet disclosed their projected MSRP, it could be $25 or it could be more, however it does not give the sense of much added value. Tim’s multiple pledge bundles did not seem to discount volume at all, 1 for $25, 2 for $50, 3 plus a Nike + for $100 ($5 savings here actually), 4 plus a Nano for $250 or $280 (8gb and 16gb versions) and 8 plus 2 Nanos for $500. There is no perceived extra benefit for spending more, so it almost make’s it redundant to spend more unless one person really likes wearing several bands at once.

One point of interest with the Ultimate One. pledging process is that a consumer wanted a pledge option for the 16gb Nano, and Tim gave the customer what he wanted. Changing up his reward schedule on the fly to accommodate. He failed to capitalize on it though by not mentioning it in one of his updates though, maybe one of his early backers would have increased their pledge if they had known the option was available.

Both products have complimentary shipping included in the bid price for their country of origin (the US) and international is extra. Tim had the foresight to not only include a general amount by also a total for the pledge level (reward + shipping) to make it more apparent the amount one must enter in order to pledge. This can be a little confusing for newer people who come to the site, so that consideration can be invaluable. It is a relief not to be surprised with an extra fee later, or kicking oneself for not including it upfront.

The Ultimate One. and the TikTok+LunaTik are successful projects. They have both been pledged the amount necessary to obtain funding. Neither project is a failure. However they have given a glimpse, when compared, who and how crowd funding works when given the opportunity and how far it can go. Either way it requires an amazing idea from the start. I look forward to someday presenting an idea on this platform and hope it works equally as well! The TikTok+LunaTik pledge period has closed however there is still time on the Ultimate One. As for my opinion on the superior band? I backed them both.